Working with Johnny on location took some planning.  Initially, I found a location that I thought would work for the performance strand of my work.  I researched the location and had decided on various themes and ideas for the shoot.

The location chosen was Guys Cliffe House in Warwickshire. The location was available as a location share for photography group (Shoot Me Now) that we both belong to.  Owned by the Freemasons, and undergoing ongoing preservation by the Friends of Guys Cliffe, this old, historical partial ruin location has many things to offer as a location shoot.

Johnny came very well prepared with a selection of outfits for the shoot.  We decided to shoot in 3 – a black and white combination of jeans, shirt, boots, and corset; a formal suit and tie (although we did pair this with silver glitter stilettos); and a black combination of hotpants, corset, knee high boots, feathers, latex cuffs, pearls and a mask.

I took plenty of props along for the shoot –

For each photograph, the background and composition were important.  The background needed to have interesting colour and textures that would complement and not detract from Johnny.  Whilst the natural light at each location was a factor, I chose to use a directional flash with honeycomb grid to give a dramatic feel to the images.  The honeycomb grid creates a narrow beam of light that stops only falls on the object or model you are pointing it at and the light does not spill everywhere. Grids are ideal for dramatic lighting setups and give a more contrasty image.  The grids also enabled me to  highlight the Johnny and his features,  providing a degree of separation between him and the background. The grid allowed me to introduce an element of lighting control into my images.

Each composition was carefully considered and intended to create narrative in the image.  Working together, Johnny and I decided on the specific poses for each shot, making the best use of the scene and props. For this shoot, I intended to stand back more from the images than I normally do.   The downside of this is that the images can give the impression that, as the photographer,  I am absent from the performing in front of the lens. I was shooting a wider image to include the amazing location, but don’t see as much of myself in the images as I would like. The module leader has suggested that I use something like a pocket mirror to reflect back on me and include me more in the final images.

Post processing was minimal except for a couple of images where I decided to affect the feel of the image by treating the images.  One comment that I received about them was that these images looked like I had tried to mask errors with the post processing treatment and that this was emphasised when a group of treated and untreated images were shown together. I hadn’t considered that this could be the viewer’s interpretation of these images.  The rabbit image (figure 2) was treated to see how far I could push it – the original image (figure 1) is fine as it is, but I wanted it to have an older feel to it.  The other treated image (figure 4) was shot in bright sunlight, so the treatment helped the original image (figure 3). 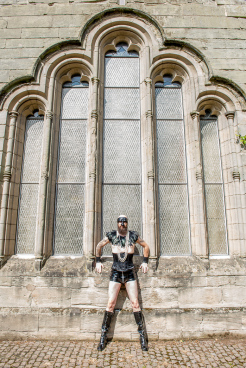 The rabbit images in figures 6 and 7 are my response to Warhol’s use of a rabbit mask (figure 15), in which he produced an image that is both whimsical and intriguing. The image is not a representation of a true character. Instead it is simulation, a hyperreal image where truth and fiction are blurred. This image interests me in relation to my own work as it demonstrates a performance and ambiguity in the meaning of the image. Warhol’s image uses a dark background for this black and white image. Warhol has used less contrast and so details on not is clearly defined in the mask that is worn. There is an element of blurring out the detail in his image, which adds to the ambiguity. There is nothing around the subject to give context or meaning as to why the mask is being worn.  I set out to produce images that lead the viewer to question the intent and meaning of each image.  The pig mask image in figure 8, is a variant on this.

The images involving the Venetian masks were shot in caves beneath the house carved into the rock. I chose the plague doctor mask for figures 9 and 10 as the long nose seemed fitting.  It added an air of sinisterness to the scene. I am particularly pleased with figure 10 as the pose and lighting make this a strong image.  This is enhanced by the composition and placement of Johnny in the frame.

Figure 11 was challenging.  This was shot in the pitch black cellar using a light from my iPhone to illuminate Johnny sufficiently for my camera to focus and take the shot.  Trial and error resulted in the composition below.  Johnny is wearing a spiky studded Venetian eye mask to make him appear threatening.  The caves and cellars at Guys Cliffe are reportedly haunted and this was the inspiration behind this image.

Johnny enjoys challenging perceptions and the norm by dressing and posing in such a way that makes the viewer question what they are looking at.  Even other participants at the location share made comments about his appearance.  This is great.  My aim is always to have viewer engagement through oddness in the images.

Heels for men is not a new concept. Louis XIV is said to have worn four-inch heels made by Nicholas Lestage in the 1660s. “For a great king, he was rather diminutively proportioned at only 5ft 4in (1.63m).  He supplemented his stature by a further 4in (10cm) with heels, often elaborately decorated with depictions of battle scenes.”(BBC News, 2013).  However, Johnny’s wearing of heels does generate conversation and discussion amongst the viewers of the images. Figure 12 is an example of the images produced on the day.

Challenging the perception of the norm, was further explored by the final costume.  Johnny is wearing a Venetian mask that is extremely masculine and has a sinister feel to it.  I was attracted to this aspect of the mask when I found this in a mask shop Venice.

This outfit did create a few comments on the day of the shoot and continues to do so when the images are viewed.

A viewer of the images (a good friend of mine) commented that in some of the images, especially figure 3, the outfit looks almost blasphemous.  Johnny and I felt that at times too on the shoot. For this reason, we decided it would not be appropriate for us to shoot any images in the Masonic rooms.  So we chose outdoor locations on the site, where the outfit would be fitting.

In figure 14, Johnny looks like the keeper of protector of the building.  The scale of the ruins are impressive, with only a small amount shown in this image.  The edit was chosen specifically so that the viewer would be unsure when this image was shot.  The monochrome tones also allowed me to increase the clarity to its maximum and also to increase the contrast in the image so that the image had added impact.

I appreciate that the images we shot at this location shoot are not to everyone’s taste and that there are many differing opinions about the work.  Personally, I am pleased with the overall results and can’t wait to edit the rest.

Surfaces and Strategies – Where will this lead?

I have several ideas as to where the work could go next… Each part of our body has its own story to tell. When we view images of body parts, we wonder where feet or legs may have taken the person. We